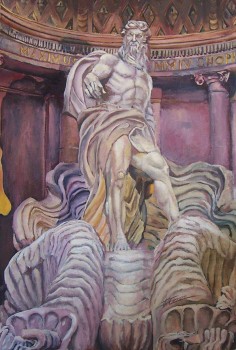 Centerpiece of a triptic set on the Trevi Fountain at Rome.

In 1629 Pope Urban VIII, finding the earlier fountain insufficiently dramatic, asked Gian Lorenzo Bernini to sketch possible renovations, but the project was abandoned when the pope died. The planning for a new fountain on the site began again 100 years later. This time under the Roman architect Nicola Salvi, whose work was inspired by the sketches left by Bernini. The fountain took 30 years to finish and it stood completed in year 1762.

The Trevi Fountain is dominated by a several large statues. The very center of the fountain is dominated by a man standing in a large shell chariot. This statue depicts the Roman god of the water and the seas, Neptune – also known as Poseidon in Greek mythology. The chariot is pulled by two sea horses. One of them is calm and submissive while the other one is impatient and restless. The creature’s different temper is said to symbolize the fluctuating moods of the sea.

Each one of the horses is guided by a triton – a mermaid like creature who formed the escort of marine divinities in the Greek mythology.  The creatures do not only add symbolic meaning to the fountain with the contrast in their mood and poses, but they also provide a symmetrical balance.

Currans Hill artist Phil Carrero started as an impressionable 16 year old drawing charcoal portraits through the streets of Buenos Aires. He worked his way up from drawing to painting and begun to sell his works around that time. Coming to Australia in 1973 , at the age of 23, Mr Carrero continued his studies in Art and completed an apprenticeship for four months to get himself better acquainted with portraiture painting. Meanwhile, for almost ten years produced and sold many ship portraits and marine paintings. -After that I begun getting around 12 commissions a year for just portraits. That's the point when he begun to make a living out of painting-, he said. He paints in the Traditional, Realistic style ... English and Italian schools, his portraits can resemble the Grand Manner style of the 19th and 20th centuries in England and later, America. (extracted from "Artist has brush with thieves", Macarthur Advertiser, January 2004)

View all of Phillip's posts.